Roy Oswalt has not been himself. How do I know that? He's on my goddamned fantasy team, that's how. He left last night's game after 3 innings, giving up 6 hits and 5 earned runs. He's been pitching well, but not up to his usual stuff. On top of that, Cliff Lee got laced up by the Arizona Diamondbacks (most irrelevant team in Major League Baseball? Maybe not.) the day before, giving up 2 home runs and 5 hits. Not so great looking now are they? Roy Halladay is still Roy Halladay, almost unstoppable, barely understandable as a pitcher, the guy is out of hand. Cole Hamels is also pitching well, and Joe Blanton is, well, Joe Blanton. The biggest problem facing these "Four Aces"? Run production. The Phillies offense has definitely been lacking it's usual power this year. Their 10th in the National League for overall batting average, preventing them somewhat from dominating baseball the way everyone predicts them to. It's actually kind of nice to watch the two teams that everyone predicted would run away with their respective leagues struggle a bit, also being from New York, I know that it's fucking awesome to see the Red Sox and the Phillies not living up to the expectations set for them, even if it is only April. 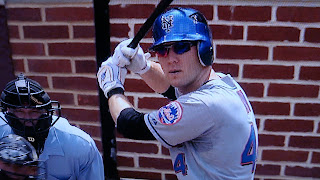 Did anyone else catch this new sunglasses thing? Fielders have always worn sunglasses, but the other day I noticed Jason Bay and basically the entire Baltimore Orioles organization wearing sunglasses while batting. Is this common? I'm kind of lost here. I totally get wanting to wear your sweet new Oakley's all the time, but it looked really strange to me. Wouldn't they have trouble seeing the ball? What if they get hit in the face? All sorts of comedy can ensue from this, but I'm sure if they're wearing sunglasses at the plate they must be specially designed or something.
The Mets have now won 5 games in a row. I know I slagged off on them yesterday, and they deserve it, but it's kind of nice to see a baseball team from Queens playing decently for a change. It should be noted, however, that the Mets played the Astros, Diamondbacks, and Nationals during this little winning stretch, so there isn't too much to be proud of. The Phillies are heading into the home run eating cavern that the Mets call home, so it should be interesting to watch how that goes (we all know the Mets are going to lose right? OK, just making sure.).

Speaking outside of baseball now, Phantom Ballplayer is fucking killing it. We're getting pageviews like a motherfucker and beginning our domination of the internet. In honor of our awesome achievement, we're gonna throw a big ass party, cause that's what we like to do over here. More details will follow, but it won't be a cool launch party like you read about, no clubs, no DJ's, just straight up alcohol abuse in my backyard or some shit. Also, I know that my posts have been lacking in humor, talent, interestingness and timeliness lately, but I'm about to graduate college, and even at a good old SUNY school, my workload is enormous, so bear with me.
Posted by MD Flanagan at 4:03 PM